Many Hornets, one hive!

Booker T. Washington is a world-class high school in the heart of America. In 2009 and 2016 the school received the coveted distinction of being a Blue Ribbon School recognized by the United States government for being academically superior. Our school is ranked as one of the top high schools in the U.S.

Founded in 1913 to serve the citizens of the African-American community, Booker T. Washington was chosen in 1973 to be the vehicle for Tulsa's school desegregation program. This school was established as a magnet school and serves students from every racial, ethnic, religious, and socio-economic group in Tulsa. Booker T. Washington continues to thrive based on the twin ideals of promoting excellence and acceptance of diversity. This philosophy has resulted in our institution's recognition as one of the most successful secondary schools in the United States. Our racially-balanced student body boasts a nationally-ranked academic bowl team and speech and debate team, as well as championship basketball, football, soccer, swim, and volleyball teams.

We are at the forefront of academic trends as one of only two high schools in Oklahoma to offer the International Baccalaureate Diploma and the only high school in Oklahoma to offer the IB Middle Years Programme. These programs attract students who thrive in an academically challenging environment. Major universities and colleges, as well as technical, business, government, art and music academies actively recruit Booker T. Washington students.

The IB programs are different from other curricula because they:

Beyond preparing students for college-level work, the International Baccalaureate program calls for students to express themselves through writing, requires community service, and aims “to develop inquiring, knowledgeable and caring young people who help to create a better and more peaceful world through intercultural understanding and respect.”

AT BTW, STUDENTS CAN:

Booker Taliaferro Washington (April 5, 1856-November 14, 1915) was born a slave to an African American mother and an unknown white father. He was freed at age nine.  Understanding the importance of an education at sixteen Booker T. began attending college in Virginia, working as a janitor to help pay his expenses. After teaching for several years and attending seminary school, Booker T. eventually became the first principal of Tuskegee Institute. There he had the position to advocate on behalf of African Americans, encouraging them to get their constitutional rights through their own moral and economic advancement.

Washington believed in equity. He believed that through technical skills and personal productivity, African Americans would eventually be seen as equals in society. Washington believed in teamwork and excellence. He founded and oversaw the Tuskegee Institute to ensure the continued success of the students, including George Washington Carver. Washington exhibited great character. He worked hard to support his fellow men, and dedicated his entire life to the betterment of others. These values are consistent with those the the Booker T. Washington High School community cherishes.

Success is to be measured not so much by the position that one has reached in life as by the obstacles which he has overcome.

The original Booker T. Washington High School was a four-room building located at 507 E. Easton St. built in 1913. E. W. Woods was the first principal, serving a modest student population 14 students and two teachers. With a growing Tulsa population, the building on E. Easton St. became inadequate; prompting the construction of a larger three-story building at the same location. Escaping the destruction of the Tulsa Race Massacre, this school served African-American students from 1920 until a third Booker T. Washington High School was erected at 1631 E. Woodrow Pl., in 1950. The first graduating class from this building was the mighty class of 1961.

For sixty years, Booker T. Washington High School served the African-American community of North Tulsa. However, in 1973, responding to the U.S. Supreme Court ruling in Brown vs. Board of Education in 1954 and the Civil Rights Act of 1964; Tulsa Public Schools chose Booker T. Washington to be a model for their school desegregation program. The district began to bus in white students while continuing to allow students who lived near the school to attend as well. This changed Booker T. from a neighborhood to a magnet school as it is known today.

Booker T. has a rich history of excellence in academics, athletics and community service.  This is noted in the vast number of distinguished alumni.  The number of alumni who have excelled throughout the schools rich history prevents us from listing them all.  However, many of them have been inducted into the Booker T. Washington Distinguished Hall of Fame.

After serving as the principal of George Washington Carver Middle School for two consecutive years, I took a sabbatical from the district to teach undergraduate science courses in biological science, human anatomy, and zoology at Oklahoma State University Institute of Technology. Following my year-long sabbatical, I returned George Washington Carver Middle School where I remained principal for an additional six years. In 2017, I began serving as the principal of my alma mater and the pride of the great southwest, Booker T. Washington High School.

Science is my passion, education is my mission.

I have been working for TPS and at Booker T. Washington High School since 1994.  I taught biology for 18 years and have served as the IB Diploma Program Coordinator since 2000.  In 2012, I moved into my current role as Assistant Principal.  My current responsibilities include IB Diploma Program, district/state/IB testing, Special Services, admissions/recruitment, master calendar, master scheduling, and supervision of staff and students.

While not a graduate of Booker T., I have received a tremendous education from its students, staff, and community.  I am proud to be a Hornet!

I grew up in Oklahoma and attended The University of Oklahoma for my undergraduate degrees in History and Journalism, and OU Tulsa for my M.Ed.  My wife Mariann and I got married in 2016.

I have been working in TPS since 2007.  I was a classroom teacher for four years at Gilcrease Middle School, one year at Mclain Jr. High, and four years at Phoenix Rising.  I also worked at Central High School before becoming assistant principal at Booker T.

I am so proud to be a Hornet!

I have been part of the Tulsa Public Schools team since 2000, including 13 years teaching 7th grade language arts, geography and Read 180 at Thoreau Demonstration Academy. I also served as the school's athletic director, language arts department chair, site improvement plan coordinator, and building test coordinator. I have been an assistant principal since 2013, working at Salk and Tulsa MET before coming to Booker T. Washington in 2018.

I have my undergraduate degree in history and secondary education from The University of Tulsa and hold masters degrees in education administration and as a reading specialist from Northeastern State University.

My special affinity for Booker T. began when I was ten years old. I had just moved here from a small town in Kansas. I came to my first ever basketball game and had the privilege of watching Wayman Tisdale play. From that point, both Booker T. and basketball have occupied a very special place for me, and I am proud to be a Hornet!

MEET ALL OUR STAFF

In all things social, we can be as separate as the fingers, yet one as the hand in all things essential to mutual progress.

Booker. T Washington student signs with the University of Oklahoma

We are excited to announce that Booker T. Washington quarterback Gentry Williams committed to play for the University of Oklahoma on Monday. Surrounded by family, coaches, and fellow students, Gentry announced his decision, and the S.E. Williams field immediately field filled with shouts of support.

"I'm grateful for this opportunity. I'm ready to go," said Gentry. "This is the team I grew up loving -- grew up going to OU games since I can remember. So, having this opportunity to wear that crimson red, there's nothing like it. This is an opportunity I'm not going to take for granted." 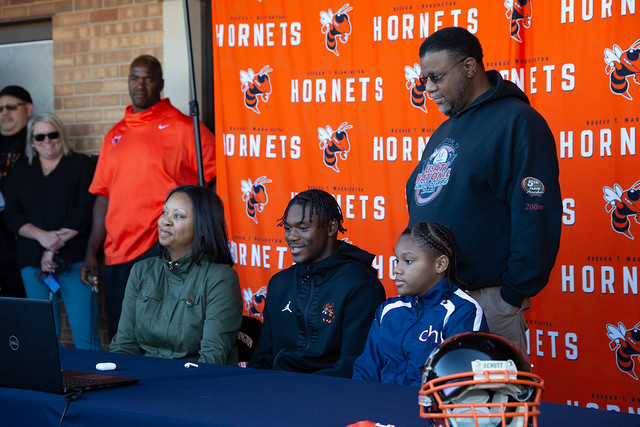